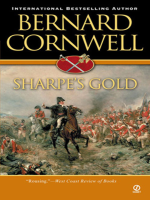 Description
An action-packed historical adventure from Bernard Cornwell's enthralling series on the Napoleonic WarsA daring, impossible mission might just be their last hope.A year after the victory at Talavera, things are looking bleak. With Wellington outnumbered, the bankrupt army's only hope of avoiding collapse is a hidden cache of Portuguese gold. Only Captain Richard Sharpe is capable of stealing it—and it means turning against his own men.
Also in This Series