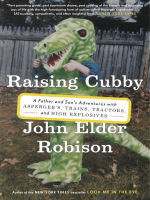 The slyly funny, sweetly moving memoir of an unconventional dad's relationship with his equally offbeat son—complete with fast cars, tall tales, homemade explosives, and a whole lot of fun and trouble John Robison was not your typical dad. Diagnosed with Asperger's syndrome at the age of forty, he approached fatherhood as a series of logic puzzles and practical jokes. Instead of a speech about the birds and the bees, he told his son, Cubby, that he'd bought him at the Kid Store—and that the salesman had cheated him by promising Cubby would "do all chores." While other parents played catch with their kids, John taught Cubby to drive the family's antique Rolls-Royce. Still, Cubby seemed to be turning out pretty well, at least until school authorities decided that he was dumb and stubborn—the very same thing John had been told as a child. Did Cubby have Asperger's too? The answer was unclear. One thing was clear, though: By the time he turned seventeen, Cubby had become a brilliant and curious chemist—smart enough to make military-grade explosives and bring federal agents calling. With Cubby facing a felony trial—and up to sixty years in prison—both father and son were forced to take stock of their lives, finally accepting that being "on the spectrum" is both a challenge and a unique gift.