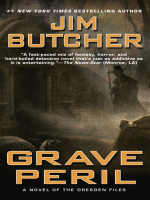 Description
Called to Cook County hospital to deal with an enraged ghost, Harry Dresden, Chicago's resident wizard, is puzzled and disturbed not by the ghost's wrath but by the fact that someone had cast a torture spell on it, goading it into action. Harry's disturbance increases when he discovers that the same spell has been cast on one of his friends. Harry begins to realize that he and his friends may be targets of a vengeful spirit, and as he desperately tries to discover which of his many enemies has it in for him, his friends are attacked one by one. The spirit, whom Harry refers to as the Nightmare, continues to torment Harry's friends until he manages to cast a spell preventing it from harming anyone else until it kills him, which leads to a showdown that Harry might not survive.
Also in This Series