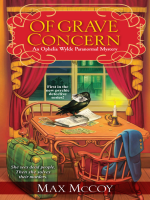 "An entertaining romp with quirky characters that would make Mark Twain proud . . . I couldn't put this imaginative page-turner down." —Margaret Coel, New York Times-bestselling author of Buffalo Bill's Dead Now In the Old West, legends die hard—and so do witnesses. But that won't stop psychic-turned-detective Ophelia Wylde from finding fresh graves, digging up clues, and catching wanted criminals—with a little help from the dead . . . Dead Men Tell No Lies The Civil War is over, and many a young widow has turned to spiritualism to contact a husband on "the other side." But Ophelia Wylde won't be fooled twice. After wasting her money on a phony psychic, she decides if she can't beat 'em, join 'em. She leaves New Orleans and heads west, selling her services as a spiritual medium who speaks to the dead. By the time she reaches Dodge City, business is booming. Except for a handsome but skeptical bounty hunter named Jack Calder, no one suspects Ophelia of running a con game—until an unfortunate "reading" of a girl who's still living exposes her to a town full of angry customers. As punishment, the mob drags Ophelia to Boot Hill and buries her alive in a fresh grave overnight. That's when the dead start speaking. To her. For real. And for dead people, they've got lots to say . . . "Masterful." —True West