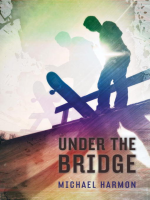 Tate's younger brother Indy is probably the best skateboarder in Spokane. He's also really smart though he couldn't care less about school. But when Indy clashes with his father one too many times and drops out of school, it's up to Tate to win his brother back from the seedier elements of Spokane. Can Tate convince Indy to come home, finish his high school degree, and return to skating Under the bridge with their crew?Michael Harmon's fast-paced and highly charged novel captures the enduring bond between brothers and their struggle for survival on the gritty streets of Spokane.