The Lost Get-Back Boogie: A Novel 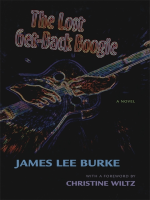 Before The Lost Get-Back Boogie appeared to wide acclaim in 1986, James Lee Burke had been out of print in cloth for thirteen years and his fifth novel had received a record 111 rejection letters. "LSU Press put me back in the game and turned my career around," Burke says. The novels and stories Burke had written during those years of rejection eventually became the stuff of the Dave Robicheaux series, which has earned him two Edgar Awards.

Reviews of The Lost Get-Back Boogie now seem prescient. "This is the book that Burke was born to write—and you're grateful he did," wrote syndicated reviewer Nancy Pate. "It's the sort of novel that could win Burke a wider readership," said the Wichita Eagle-Beacon. And from the St. Louis Post-Dispatch, "The Lost Get-Back Boogie was my introduction to Burke, and it is a cherished one. Burke demonstrates a rare ability to write an extraordinarily propulsive tale that borders on genre fiction without ever being less than literature."

The novel's title is also the name of the song that Iry Paret—a honky-tonk musician, Korean vet, and ex-con—wants to write to hold his memories of a "more uncomplicated time," before the war, before prison. The book opens the day thirty-year-old Iry leaves Louisiana's Angola state penitentiary, after serving two years for manslaughter, and follows him to Montana, where he hopes to stay cool and out of trouble by working hard on a ranch owned by the father of his prison pal, Buddy Riordan. Iry finds the fresh start he seeks, joins a weekend band, and even falls in love. But the Riordan family's problems deal Iry a new sort of trouble with some ultimately tragic consequences.

The Lost Get-Back Boogie is a novel about loyalty and friendship, betrayal and loss. It is about essentially good people and their attempts to define the value of their lives and to find their place in a changing, complicated world. And it is the work of James Lee Burke at the top of his form.