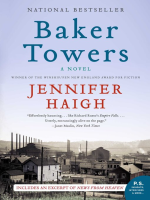 Description
A stunning follow-up to her bestselling debut, Mrs. Kimble, Jennifer Haigh returns with Baker Towers, a compelling story of love and loss in a western Pennsylvania mining town in the years after World War II

Bakerton is a company town built on coal, a town of church festivals and ethnic neighborhoods, hunters' breakfasts and firemen's parades. Its children are raised in company houses -- three rooms upstairs, three rooms downstairs. Its ball club leads the coal company league. The twelve Baker mines offer good union jobs, and the looming black piles of mine dirt don't bother anyone. Called Baker Towers, they are local landmarks, clear evidence that the mines are booming. Baker Towers mean good wages and meat on the table, two weeks' paid vacation and presents under the Christmas tree.

The mines were not named for Bakerton; Bakerton was named for the mines. This is an important distinction. It explains the order of things.

Born and raised on Bakerton's Polish Hill, the five Novak children come of age during wartime, a thrilling era when the world seems on the verge of changing forever. The oldest, Georgie, serves on a minesweeper in the South Pacific and glimpses life beyond Bakerton, a promising future he is determined to secure at all costs. His sister Dorothy, a fragile beauty, takes a job in Washington, D.C., and finds she is unprepared for city life. Brilliant Joyce longs to devote herself to something of consequence but instead becomes the family's keystone, bitterly aware of the opportunities she might have had elsewhere. Sandy sails through life on looks and charm, and Lucy, the volatile baby, devours the family's attention and develops a bottomless appetite for love.

Baker Towers is a family saga and a love story, a hymn to a time and place long gone, to America's industrial past and the men and women we now call the Greatest Generation. This is a feat of imagination from an extraordinary new voice in American fiction, a writer of enormous power and skill.