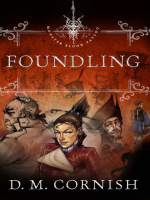 Meet Rossamünd—a foundling, a boy with a girl's name who is about to begin a dangerous life in the service of the Emperor of the Half-Continent. What starts as a simple journey becomes a dangerous and complicated set of battles and decisions. Humans, monsters, unearthly creatures . . . who among these can Rossamünd trust? D. M. Cornish has created an entirely original world, grounded in his own deft, classically influenced illustrations. Foundling is a magic-laced, Dickensian adventure that will transport the reader.