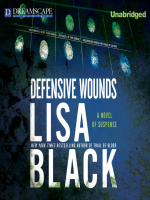 When her daughter Rachael, working a summer job at the Ritz-Carlton, calls Cleveland forensic scientist Theresa MacLean to say a murder has just occurred at the hotel, Theresa knows she's stepping into a forensic mess. A local criminal defense attorney has been bound and beaten to death. The victim was attending a convention for criminal defense attorneys, which means the list of suspects could stretch a mile long. Two more bodies are found in quick succession, each killed in a similar manner, and the authorities know they have a serial killer on their hands. As Theresa searches for the threads that tie the cases together, she begins to fear that both she and her daughter are closer to danger than either of them realize.