The invisible front: love and loss in an era of endless war 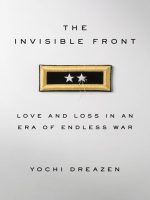 Description
"The story of Army Major General Mark Graham and his wife Carol, whose two sons are both military men. Their sons pass (one from suicide, one in combat), and the Grahams' grief sheds light on military culture, and society's struggle to come to terms with the death of our soldiers"--
"The unforgettable and sensitively reported story of a military family that lost two sons--one to suicide and one in combat--and channeled their grief into fighting the armed forces' suicide epidemic. Major General Mark Graham is a decorated two-star officer whose integrity and patriotism inspires his sons, Jeff and Kevin, to pursue military careers of their own. When Kevin and Jeff die within nine months of one another--Kevin commits suicide and Jeff is killed by an IED in Iraq--Mark and his wife Carol are astonished by the drastically different responses their sons' deaths receive from the Army. While Jeff is lauded as a hero, Kevin's death is met with silence, evidence of the terrible stigma that surrounds suicide in the military. Convinced that their sons died fighting different battles, Mark and Carol commit themselves to changing the institution that is the cornerstone of their lives. The Invisible Front is the story of a family's quest to make PTSD and mental illness in the Army more visible, but it is also a window into the military's institutional shortcomings and its resistance to change. As Mark ascends the military hierarchy and eventually takes command of Fort Carson, Colorado--a sprawling base with one of the highest suicide rates in the armed forces--the Grahams come into direct conflict with an entrenched military bureaucracy that considers mental health problems to be a display of weakness and that has refused to acknowledge the severity of its suicide problem. Yochi Dreazen, an award-winning journalist who has covered the military since 1999, has been granted remarkable access to the Graham family and tells their story in the full context of two of America's longest wars. Dreazen places Mark and Carol's personal journey, which begins with Mark's entry into the military and continues through his retirement thirty-four years later, against the backdrop of the military's suicide spike, investigating broader issues in military culture. With great sympathy and profound insight, The Invisible Front examines America's problematic treatment of its soldiers and offers the Graham family's work as a new way of understanding the human cost of war and its lingering effects off the battlefield"--
Also in This Series