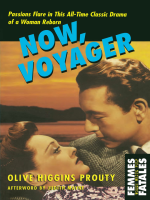 Description
The iconic American melodrama that inspired the 1943 cult classic film starring Bette Davis. "Charlotte Vale a timeless and very sophisticated Cinderella." —Patricia Gaffney, New York Times bestselling author
"Don't let's ask for the moon! We have the stars!"
The film Now, Voyager concludes with these famous words, which reaffirmed Bette Davis's own stardom and changed the way Americans smoked cigarettes. But few fans of this rich story know its source. Olive Higgins Prouty's 1941 novel provides a rich, complex portrait of the inner life of its protagonist and the society she inhabits. Over half a century later, it still offers fresh and quietly radical takes on psychiatric treatment, traditional family life, female desire, and women's agency.
Boston blueblood Charlotte Vale has led an unhappy, sheltered life. Dowdy, repressed, and pushing forty, Charlotte finds salvation in the unlikely form of a nervous breakdown, placing her at a sanitarium, where she undergoes treatment to rebuild her ravaged self-esteem and uncover her true intelligence and charm.
Femmes Fatales restores to print the best of women's writing in the classic pulp genres of the mid-20th century. From mystery to hard-boiled noir to taboo lesbian romance, these rediscovered queens of pulp offer subversive perspectives on a turbulent era.
"Like the film it inspired, Olive Higgins Prouty's Now, Voyager is as striking for the conventions it bucks as for the ones it embraces: a vivid reminder of a time when people crossed the ocean in liners and wore hats, and a hymn to an American ideal of social, moral, and emotional independence." —David Leavitt, author of Shelter in Place