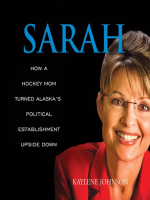 Sarah Palin a hockey mom and small town mayor, thought her dream of making a difference in the male-dominated realm of Alaska politics was over when she clashed with the state chairman of her Republican Party and went head to head with the powerful Republican governor. In 2006, she became a long-shot candidate for governor demanding a higher ethical standard in state government. Then, fate intervened. Her populist reform message suddenly became front page news when a major political scandal rocked Alaska politics, Alaskans began listening to her, and they liked what they heard.