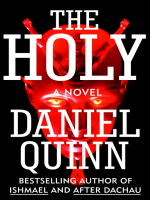 They knew us before we began to walk upright. Shamans called them guardians, mythmakers called them tricksters, pagans called them gods, churchmen called them demons, folklorists called them shape-shifters. They've obligingly taken any role we've assigned them, and, while needing nothing from us, have accepted whatever we thought was their due – love, hate, fear, worship, condemnation, neglect, oblivion. Even in modern times, when their existence is doubted or denied, they continue to extend invitations to those who would travel a different road, a road not found on any of our cultural maps. But now, perceiving us as a threat to life itself, they issue their invitations with a dark purpose of their own. In this dazzling metaphysical thriller, four who put themselves in the hands of these all-but-forgotten Others venture across a sinister American landscape hidden from normal view, finding their way to interlocking destinies of death, terror, transcendental rapture, and shattering enlightenment.