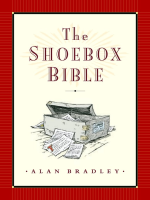 On a cold, dark winter day during the Second World War, a young Alan Bradley found hidden beneath a floorboard in his mother’s bedroom closet a well-worn cardboard shoebox.
At the time, he could make little sense of the ragtag things he found inside: cigarette packages, soup can labels, handbills, calendars, paper bags, pie boxes—any scrap of paper upon which his mother could copy out, in her old-fashioned handwriting, what seemed to be no more than unrelated snippets of Scripture.
He only knew that the box, which he would later come to think of as the Shoebox Bible, had something to do with the fact that his father had run away from home.
Many years would pass, and his mother would be on her deathbed before he would once again hold this treasure in his...