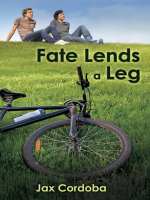 Description
Teenage Olympic running hopeful Calvin Granger arrives in his new town angry about changing schoolsâagainâand sad about leaving his boyfriend behind. Then he meets skittish cyclist Bill Moilet, and soon strange dreams and thoughts of Bill distract Calvin from his miseryâ¦ until Calvin breaks his leg and his Olympic ambitions crumble. Cal's injury does have one upside: it brings him closer to Bill, who offers to help him out while he's recovering. But whenever they start to get too close, Bill clams up or disappears. To add to Cal's frustration, living with a full-leg cast proves to be a miserable experience. When Bill finally begins to open up to Cal, the strange dreams become more vividâdreams, Cal learns, that they share. Can the boys decipher what their subconscious minds are trying to tell them, or is history doomed to repeat itself?
Also in This Series