My Bondage and My Freedom »

My Bondage and My Freedom: Barnes & Noble Classics Series 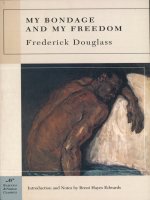 My Bondage and My Freedom, by Frederick Douglass, is part of the Barnes & Noble Classics series, which offers quality editions at affordable prices to the student and the general reader, including new scholarship, thoughtful design, and pages of carefully crafted extras. Here are some of the remarkable features of Barnes & Noble Classics:

All editions are beautifully designed and are printed to superior specifications; some include illustrations of historical interest. Barnes & Noble Classics pulls together a constellation of influences—biographical, historical, and literary—to enrich each reader's understanding of these enduring works.

Born a slave, Frederick Douglas educated himself, escaped, and became one of the greatest social leaders in American history. Although usually identified with the monumental Narrative of the Life of Frederick Douglass, An American Slave, Douglass produced two additional autobiographies, the second of which he called My Bondage and My Freedom. A richer, deeper, and far more ambiguous work than the earlier Narrative, My Bondage and My Freedom reveals Douglass's increased intellectual sophistication and maturity. In the decade that had elapsed since Douglass wrote Narrative, he had broken away from his antislavery mentors, successfully toured England, and established himself as an inspired speaker and writer. With the publication of My Bondage and My Freedom in 1855, Douglass became the country's foremost spokesman for American blacks—free and enslaved—during the tense and politically charged years preceding the Civil War.One of the highlights of My Bondage and My Freedom is the appendix, which contains excerpts from several of Douglass's speeches, including perhaps his most famous, "What to the...