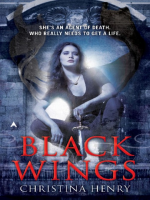 As an Agent of Death, Madeline Black is responsible for escorting the souls of the dearly departed to the afterlife. It's a 24/7 job with a lousy benefits package.

Maddy's position may come with magical powers and an impressive wingspan, but it doesn't pay the bills. And then there are her infuriating boss, tenant woes, and a cranky, popcorn-loving gargoyle to contend with.

Things start looking up, though, when tall, dark, and handsome Gabriel Angeloscuro agrees to rent the empty apartment in Maddy's building. It's probably just a coincidence that as soon as he moves in demons appear on the front lawn. But when an unholy monster is unleashed upon the streets of Chicago, Maddy discovers powers she never knew she possessed. Powers linked to a family legacy of tarnished halos.

Powers that place her directly between the light of Heaven and the fires of Hell...