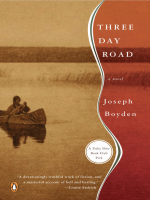 Set in Canada and the battlefields of France and Belgium, Three-Day Road is a mesmerizing novel told through the eyes of Niska—a Canadian Oji-Cree woman living off the land who is the last of a line of healers and diviners—and her nephew Xavier.

At the urging of his friend Elijah, a Cree boy raised in reserve schools, Xavier joins the war effort. Shipped off to Europe when they are nineteen, the boys are marginalized from the Canadian soldiers not only by their native appearance but also by the fine marksmanship that years of hunting in the bush has taught them. Both become snipers renowned for their uncanny accuracy. But while Xavier struggles to understand the purpose of the war and to come to terms with his conscience for the many lives he has ended, Elijah becomes obsessed with killing, taking great risks to become the most accomplished sniper in the army. Eventually the harrowing and bloody truth of war takes its toll on the two friends in different, profound ways. Intertwined with this account is the story of Niska, who herself has borne witness to a lifetime of death—the death of her people.

In part inspired by the legend of Francis Pegahmagabow, the great Indian sniper of World War I, Three-Day Road is an impeccably researched and beautifully written story that offers a searing reminder about the cost of war.