The Warlords of Nin »

The Warlords of Nin: The Dragon King Trilogy, Book 2 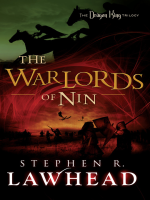 Darkness and destruction have come to the land.

It has been ten years since Quentin helped Eskevar, the Dragon King, battle the monstrous sorcerer Nimrood. Since that time, there has been peace in the land of Mensandor. But everything is about to change.

An urgent message summons Quentin to Castle Askelon. The king, who is dying, wishes to name the brave young man his successor. But first, he sends him on an unfathomable mission.

What Quentin and his friend Toli, the Jher horseman, discover is not for the cowardly. The brightening Wolf Star is an omen of impending evil that might herald the beginning of the end of mankind on earth. It signifies Nin, a fearsome giant of a man who hopes to add Mensandor to his growing empire. Along with his merciless warlords, they are the fulfillment of a nightmarish prophecy.

In The Warlords of Nin, the second book in The Dragon King Trilogy, Stephen R. Lawhead continues the mythical saga that began with In the Hall of the Dragon King.