Unintended Consequences: Why Everything You've Been Told about the Economy Is Wrong 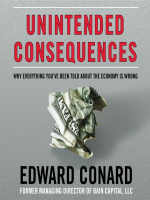 In the aftermath of the financial crisis, many commonly held beliefs have emerged to explain its cause. Conventional wisdom blames Wall Street and the mortgage industry for using low down payments, teaser rates, and other predatory tactics to seduce unsuspecting home owners into assuming mortgages they couldn't afford. It blames average Americans for borrowing recklessly and spending too much. And it blames the tax policies and deregulatory environment of the Reagan and Bush administrations for encouraging reckless risk taking by wealthy individuals and financial institutions. But according to Unintended Consequences, the conventional wisdom masks the real causes of our economic disruption and puts us at risk of a slew of unintended—and potentially dangerous—consequences.

Unintended Consequences is not a book that takes a couple of insights and expands them into three hundred pages; rather, it covers the entire scope of the economy. It's a fascinating and contrarian case for how the economy really works, what went wrong over the past decade, and what steps we can take to start growing again. Whether you agree with the book's provocative and counterintuitive conclusions or not, Unintended Consequences will reward you with a sophisticated understanding of the contemporary economy—one no other book has yet provided.