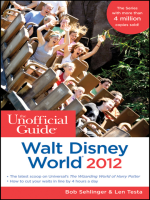 This best selling and definitive guide to Disney World is bigger and better than ever!