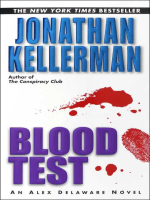 Dr. Alexander Davenport, a child psychologist in Los Angeles, is called in to evaluate the case of a leukemia patient whose parents want to discontinue chemotherapy. When the boy disappears from the hospital and his parents are found dead, the only leads are the boy's sensual older sister and a holistic-meditative cult called The Touch. Davenport's search for the child takes him to a small town near the Mexican border where he finally unearths the dark secrets kept by the boy's family and the townspeople. He also uncovers drugs and group sex in the commune and survives a few harrowing attempts on his life. (Particularly well-drawn is a failed assassination at the tale's end, which has intriguing mythic echoes.) As in his praised first novel, WHEN THE BOUGH BREAKS, Kellerman draws on his experience as a clinical psychologist to enrich and broaden his considerable storytelling talents. Imbued with a vivid sense of place and featuring a strong supporting cast, including Milo Sturgis, Davenport's burly gay detective friend, this second adventure points happily toward an Alex Davenport series.