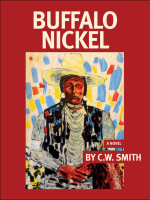 In the tradition of Lonesome Dove, C. W. Smith's novel Buffalo Nickel is a sprawling saga of love and money based on the real life of a man known to the press in the 1920s as "the world's richest Indian." When oil was struck on his Oklahoma farm in in 1917, a Kiowa called David Copperfield by his missionary teachers became an millionaire overnight and so began to live out the destiny implied by his Indian name, Went On A Journey. From his childhood in the tamed West (where buffalo are imported from the Bronx Zoo) to his career as professional Indian in Hollywood Westerns, the story of Buffalo Nickel vividly evokes all the drama and agony of living between two cultures. At the very heart of the story is an explosive triangle as two women vie for his money or his love: Laura Darby, a washed-up vaudeville singer who hopes to parlay his fortune into movie stardom; and Iola Conroy, a childhood Kiowa friend and Red Cross nurse who follows David to California, where she is forced to confront David's marriage—and her own identity. David and those around him are trapped in the tumultuous upheaval following the conquest of the Plains Tribes until thwarted desires rage into an explosive climax. "This is a western novel in the most positive sense, a book that reveals a moment in history even as it tells a story of cultural alienation, love, greed, betrayal and longing.....Though the book spans just 25 years, the emotional and physical distances Smith's characters travel are immense, and his loving narrative makes Buffalo Nickel a compelling read." Publishers Weekly