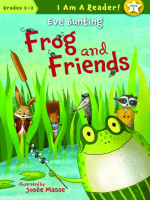 Description
Welcome to Frog and his world. He enjoys nothing better than spending time floating in his pond or visiting with his friends. He appreciates the simpler things in life and would prefer that things stay just the way they are - nice and peaceful. From acclaimed children's writer Eve Bunting comes a new beginning reader series featuring the delightful Frog and his friends Rabbit, Possum, Raccoon, and Squirrel. In the first book Frog is alarmed when he finds a strange object in his pond, he tries to re-gift a scarf, and he makes friends with a runaway hippo. In Party at the Pond Frog is busy with his autumn party, he is overseen dancing around the pond, and he narrowly escapes being turned into a prince. Retro-style artwork by illustrator Josée Masse gives a fresh, distinctive look to this new series. An author of more than 250 children's books, Eve Bunting has won numerous awards and honors. Her other books with Sleeping Bear Press include S is for Shamrock: An Ireland Alphabet and My Mom's Wedding. She lives in Pasadena, California. Josée Masse's children's books include Mirror, Mirror (selected as one of Publishers Weekly's Best Children's Books of 2010) and Mousie Love (included in Bank Street College's Best Children's Books of the Year, 2010). Josée lives near Montreal.
Also in This Series