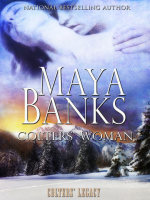 Description
Holly Bardwell is running from her past mistakes. Straight into the arms of the Colter brothers.

Adam, Ethan and Ryan aren't looking for women. They're looking for a woman. One woman they know will share their lives and their beds. They're losing hope they'll find her, that is until Adam discovers Holly lying in the snow just yards from their cabin. Adam knows she's the one the minute he holds her in his arms, and as soon as his brothers see her, they know it too. The only problem is convincing Holly of that fact—and protecting her from the danger of her past.

This book has been re-edited and revised. Includes an expanded ending and a new, never-before published short story sequel.