Expedition to the Mountains... »

Expedition to the Mountains of the Moon 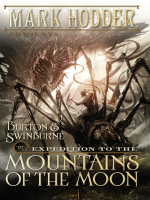 It is 1863, but not the one it should be. Time has veered wildly off course, and now the first moves are being made that will lead to a devastating world war and the fall of the British Empire. Caught in a tangled web of cause, effect, and inevitability, little does Burton realize that the stakes are far higher than even he suspects. A final confrontation comes in the mist-shrouded Mountains of the Moon, in war- torn Africa of 1914, and in Green Park, London, where, in the year 1840, Burton must face the man responsible for altering time: Spring Heeled Jack! Burton and Swinburne's third adventure is filled with eccentric steam-driven technology, grotesque characters, and bizarre events, completing the three-volume story arc begun in The Strange Affair of Spring Heeled Jack and The Curious Case of the Clockwork Man.