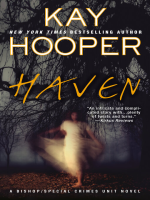 Description
New York Times bestselling author Kay Hooper returns with a breathtaking new thriller of a young woman's homecoming--to a town of menacing whispers, bad dreams, and dangerous secrets... Another nightmare, in the woods this time. Different: She was running. Trying to escape. But the same ending. Always the same ending. Another dead girl... Emma Rayburn was born and raised in Baron Hollow, North Carolina, and it was a quiet life. Then came the accident...and the nightmares--each filled with unshakable visions of darkness, blind panic, and desperate women chased toward inevitable death. With no reports of local women missing or found dead, Emma has written it off to troubled imaginings--night after dreaded night. Until her sister arrives. Jessie Rayburn, psychic investigator for a firm called Haven, has been estranged from Emma for years. Unresolved issues from Jessie's past have not only kept them apart but have been clouding Jessie's unique abilities. A return to her hometown to face a dark and violent incident from years gone by is her chance to regain them. But reconciliation with the past comes with a price. Few people in Baron Hollow are welcoming Jessie back. No one dares to breathe a word. And in this conspiracy of silence, Emma's nightmares are becoming more vivid than ever. Even with the help of Noah Bishop, head of the FBI Special Crimes Unit and co-founder of Haven, Jessie and Emma soon find themselves outnumbered by the secrets buried in Baron Hollow--and outrunning an evil that has been festering for years, one that's targeting Jessie and Emma one last time.
Also in This Series