Deliver me from evil »

Deliver me from evil 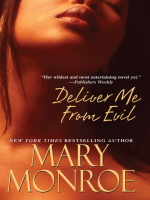 Description
Attractive, successful, and deeply in love, Christine and Jesse Ray Thurman seem to have it all, But after twelve years of marriage, J R has become obsessed with building his video store empire and is taking his wife for granted. Feeling trapped and alone in a dead-end marriage, Christine finds herself tempted by the people and places she thought she'd left behind years ago. She embarks on a sultry affair with a low-down thug and, before she knows it, she's concocted a scheme so risky that she could wind up with everything she wants - or lose everything.
Also in This Series