Pretend you don't see her »

Pretend you don't see her: a novel 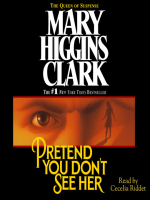 Description
Queen of Suspense Mary Higgins Clark brings us another New York Times bestselling novel that she "prepares so carefully and executes with such relish" (The New York Times Book Review) about a witness to a murder who finds that what she's seen might make her the next casualty. Mary Higgins Clark sends chills down readers' spines with the story of Lacey Farrell, a rising star on the Manhattan real estate scene. One day, while showing a luxurious skyline co-op, Lacey is witness to a murder--and to the dying words of the victim.... The dying woman is convinced that the attacker was after her dead daughter's journal--which Lacey gives to the police, but not before making a copy for herself. It's an impulse that later proves nearly fatal. Placed in the witness protection program and sent to live in the Minneapolis area, Lacey must assume a fake identity, at least until the killer can be brought to trial. There she meets Tom Lynch, a radio talk-show host whom she tentatively begins to date--until the strain of deception makes her break it off. Then she discovers the killer has traced her to Minneapolis. Armed with nothing more than her own courage and clues from the journal, Lacey heads back to New York, determined to uncover who's behind the deaths of the two women--before she's the next casualty. At once seductive and frightening, Pretend You Don't See Her is the "mistress of high tension" (The New Yorker) at her ingenious best.
Also in This Series