The Harsh Cry of the Heron »

The Harsh Cry of the Heron: The Last Tale of the Otori 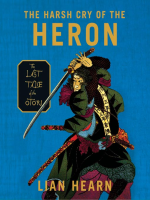 An epic fantasy set in a mythical, medieval Japan, LianHearn’s Tales of the Otori series has crossed genres, generations,and genders. Grand and complex in its themes, elegantlywritten, each book in the original trilogy hasbecome a worldwide bestseller. The surprise fourth installment(and real conclusion), The Harsh Cry of the Heronachieves new heights of drama and action.

Sixteen years of peace and prosperity have passedsince Lord Otori Takeo united the Three Countries.Takeo and his beloved consort Kaede have three daughtersand a happy family life. Their success has attractedthe attention of the distant Emperor and his general,the warlord Saga Hideki, who covet the wealth of theCountries. Meanwhile, the violent acts and betrayals ofthe past will not lie buried, and other secrets will notstay hidden. Everything that Takeo and Kaede haveachieved is threatened.

The Harsh Cry of the Heron © 2006 Lian Hearn. Recorded by arrangement with Riverhead Books, a member of Penguin Group (USA) Inc.