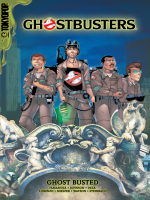 Looking for a manga packed with ghoulies and guffaws galore? Who ya gonna call? GHOSTBUSTERS, of course! Find out what's been happening since the Ghostbusters last saved New York City as Peter, Ray, Egon, Winston and the rest of the gang make their first manga appearance! The phrase "Everyone's a critic" takes on a whole new meaning when the crew is called in to help out a troubled Broadway production. Later, Ray learns that being a Ghostbuster isn't always the thrill-a-minute job he'd imagined it would be. And Egon has a touching interlude with a former instructor who still has a thing or two to learn about the afterlife. Then it all comes down to the ultimate showdown between our heroes and a team of peeved poltergeists.

The Ghostbusters are about to be Ghost Busted!