Rumpole and the Penge Bungalow murders 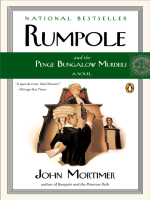 Description
Now more than ever, thousands of readers delight in the adventures of Horace Rumpole, but despite the publication of more than one hundred stories, his early years have remained shrouded in mysteryuntil now.In Rumpole and the Penge Bungalow Murders, John Mortimer tells the story of Rumpoles very first case. Looking back a half century into a very different world, Rumpole recalls a man accused of murdering his father and his fathers friend with a pistol taken from a dead German pilot. It was this trial and its outcome that put Rumpole on the map and began to shape him into the eccentric and cantankerous defender of justice and reciter of poetry readers know and love. Rumpole and the Penge Bungalow Murdersis a must read for every Rumpole fan and a compelling invitation to new readers to get to know Mortimers addictive barrister.
Also in This Series