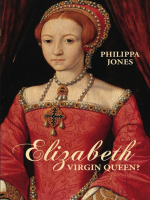 Gloriana', 'Faerie Queene', 'Queen Bess' are just some of the names given to Elizabeth I, the daughter of Henry VIII and Anne Boleyn. But the name for which she is perhaps best remembered and which best explains why Elizabeth was the last of the Tudor monarchs, was the 'Virgin Queen'.

But how appropriate is that image? Were Elizabeth's suitors and favourites really just innocent intrigues? Or were they much more than that?

Was Elizabeth really a woman driven by her passions, who had affairs with several men, including Thomas Seymour, while he was still the husband of her guardian Catherine Parr, and Robert Dudley, Earl of Leicester – a man adjudged to have been the great love of her life?

And, are the rumours of Elizabeth's illegitimate children true?

Was the 'Virgin Queen' image a carefully thought out piece of Tudor propaganda? Historian Philippa Jones, author of the acclaimed The Other Tudors, challenges the many myths and truths surrounding Elizabeth's life and reveals the passionate woman behind the powerful and fearless 'Virgin Queen'.