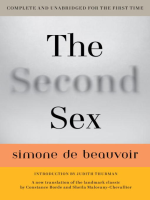 Description
Newly translated and unabridged in English for the first time, and brilliantly introduced by Judith Thurman, Simone de Beauvoir's masterpiece weaves together history, philosophy, economics, biology, and a host of other disciplines to analyze the Western notion of "woman" and to explore the power of sexuality. Sixty years after its initial publication, The Second Sex is still as eye-opening and pertinent as ever. This triumphant and genuinely revolutionary book began as an exceptional woman's attempt to find out who and what she was. Drawing on extensive interviews with women of every age and station of life, masterfully synthesizing research about women's bodies and psyches as well as their historic and economic roles, The Second Sex is an encyclopedic and cogently argued document about inequality and enforced "otherness." This long-awaited new translation pays particular attention to the existentialist terms and French nuances that may have been misconstrued in the first English edition; restores Beauvoir's phrasing, rhythms, and tone; and reinstates significant portions of the "Myths" and "History" chapters that were originally cut due to length, including accounts of more than seventy female figures. A vital and life-changing work that has dramatically revised the way women talk and think about themselves, Beauvoir's magisterial treatise continues to provoke and inspire.
Also in This Series