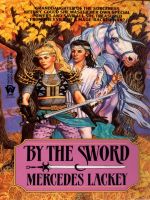 Description
Granddaughter of the sorceress Kethry, daughter of a noble house, Kerowyn had been forced to run the family keep since her mother's untimely death. Yet now at last her brother was preparing to wed, and when his bride became the lady of the keep, Kerowyn could return to her true enjoyments - training horses and hunting.

But all Kerowyn's hopes and plans were shattered when her anscestral home was attacked, her father slain, her brother wounded, and his fiancee kidnapped. Drive by desperation and the knowledge that a scorcerer had led the journey which would prove but he first step on the road to the fulfillment of her destiny.