Too late to say goodbye »

Too late to say goodbye: a true story of murder and betrayal 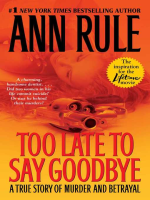 Description
Jenn Corbin appeared to have it all: two dear little boys, a posh home in an upscale suburb of Atlanta, expensive cars, a plush houseboat, and a husband--Dr. Bart Corbin, a successful dentist--who was tall, handsome, and brilliant. But gradually their life together began to crumble. There was talk of seeing a marriage counselor. Bart was distraught; Jenn seemed disenchanted. Then Jenn was found dead with a bullet in her head, a revolver beside her. From the position of the body her death appeared to be a suicide. But the detective was not totally convinced, nor was Jenn's family. And was this death related to another apparent suicide fourteen years earlier--that of a student who had dated Bart Corbin in dental school? Or was the answer to be found in a secret--even dangerous--relationship Jenn Corbin was having outside her marriage?--From publisher description.
Also in This Series