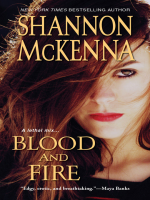 Restless and impulsive, Bruno Ranieri has the temperament to fit right in with the McClouds. And just like the McCloud brothers, Bruno has a dangerous past to contend with—one that's about to come crashing back into his life. . .

Bruno Ranieri has always lived at a chaotic pace, and that goes double lately. Since his uncle's untimely demise, Bruno is working himself to the bone, trying to keep his nose clean and save the family business. Not easy when the nightmares that plagued his childhood are hi-jacking what little rest he gets.

So when exotically beautiful Lily Parr sashays into his all-night restaurant, claiming to be on the run from mysterious assassins, Bruno starts to wonder if sleep deprivation is finally getting to him. Especially when Lily implies that Bruno is involved. But the violence that accompanies her arrival is no illusion. Nor is the blisteringly hot, completely inconvenient desire that explodes between them.

Lily Parr has been a fugitive ever since her father's death a month ago in a mental hospital. Officials claimed it was suicide, but Lily's gut—and the savage murder attempt she barely escaped afterwards—say different. Snippets of information led Lily to Bruno's door...and his magnetic charisma compelled her right into his bed. But there are cold-blooded killers on her heels, with resources as limitless as their cruelty.

Running won't help, not when the biggest threat is the terrifying secret lurking in Bruno and Lily's pasts. A secret their mysterious enemy will gladly destroy them to protect—unless they can uncover it first...