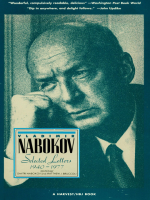 "Wonderful, compulsively readable, delicious" personal correspondences, spanning decades in the life and literary career of the author of Lolita (The Washington Post Book World). An icon of twentieth-century literature, Vladimir Nabokov was a novelist, poet, and playwright, whose personal life was a fascinating story in itself. This collection of more than four hundred letters chronicles the author's career, recording his struggles in the publishing world, the battles over Lolita, and his relationship with his wife, among other subjects, and gives a surprising look at the personality behind the creator of such classics as Pale Fire and Pnin. "Dip in anywhere, and delight follows." —John Updike