Silence in Hanover Close: a Charlotte and Thomas Pitt novel 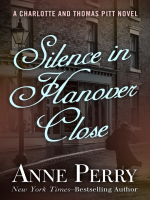 Inspector Pitt is charged with murder in this "gripping and highly satisfying" entry in the New York Times–bestselling Victorian mystery series (Publishers Weekly). At the behest of his superior, Thomas Pitt reopens a case gone cold. Three years prior, Robert York, an important member of the British Foreign Office, was murdered in his home in London's exclusive Hanover Close. Pitt has been advised to handle the situation with the utmost discretion, given the compromising circumstances of the crime: a distinguished victim from a powerful family, whispered rumors of treason, and the unimpeachable reputation of the widow, whose imminent marriage to a high-level diplomat could be cause for concern. One of Pitt's first leads, a York family housemaid, seems innocent enough, but shortly after his interrogation, the woman is found dead. To make matters worse, Pitt is accused of the crime and thrown into prison. Now, only Charlotte and her recently widowed sister, Emily, Lady Ashworth, stand between one of Victorian England's most adept private investigators and the gallows. From the upstairs drawing rooms to the servants' downstairs quarters, Charlotte and Emily play a deadly game—and it may be only a matter of time before a killer gets the best of both of them.