Long Gone: a novel of suspense 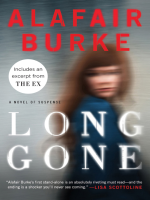 "Long Gone is a tremendous novel, and Alafair Burke is one of the finest young crime writers working today."—Dennis Lehane, author of Moonlight Mile

Echoing the intensity of Harlan Coben's Tell No One and the psychological depth of Laura Lippman's What the Dead Know, Alafair Burke's first stand-alone novel catapults her into the top ranks of modern suspense. In New York City's cut-throat world of art, appearances can be deceiving—especially when art world newcomer Alice Humphrey becomes a suspect in a gruesome murder at a Chelsea gallery, and is thrown into a treacherous labyrinth of intrigue, crime, and conspiracy. Now, Alice must discover the truth behind the murder before the unsolved mystery claims her as its next victim.