Alone: The True Story of the Man Who Fought the Sharks, Waves, and Weather of the Pacific and Won 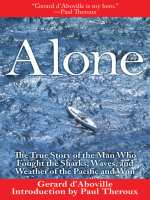 This is the incredible true story of one man's heroic battle against impossible odds, a tale of pain and anguish, bravery and utter solitude, a tale that ends in a victory not only over the implacable ocean but over himself as well.At the age of forty-five, Gerard d'Aboville set out to row across the Pacific Ocean from Japan to the United States. Taking his rowboat the Sector, which had a living compartment thirty-one inches high, containing a bunk, one-burner stove, and a ham radio, d'Aboville made his way across an ocean 6,200 miles wide. Though he rowed twelve hours a day, battled cyclones and headwinds that kept him in one place for days at a time, was capsized dozens of times forty-foot waves that hit him like cannonballs, he never quit; even when he was trapped upside down inside his cabin for almost two hours while nearly depleting his oxygen trying to right the boat. One hundred and thirty-four days after his departure, d'Aboville arrived in the little fishing village of Ilwaco, Washington, leaving his body bruised and battered, and weighing thirty-seven pounds less. This is his story.