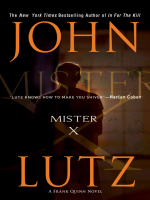 An ex-cop turned PI is hired to find a serial killer who signs his work in this crime thriller by the New York Times–bestselling author of Urge to Kill.

Fear Leaves A Mark
He mutilates his victims. Slices their throats. And carves an X into their flesh. Five years ago, he claimed the lives of six women. Then the killings abruptly stopped—no one knows why. Ex-homicide detective Frank Quinn remembers. Which is why he's shocked to see one of the dead women in his office. Actually, she's the identical twin of the last victim, and she wants Quinn to find her sister's murderer. But when the cold case heats up, it attracts the media spotlight—and suddenly the killings start again . . .

"A page-turner to the nail-biting end, the fifth Frank Quinn investigation . . . Will leave readers breathless. . . . Misleading clues and dramatic suspense will keep readers pondering the intricacies of this twisty, creepy whodunit long after the last page is turned." —Publishers Weekly, starred review

"A lesser writer would lose readers in this ever-evolving plot with shifting identities and motives, but this is John Lutz, winner of multiple Edgar and Shamus awards. By the very satisfying conclusion, it all makes perfect sense. Lutz has produced another procedural masterpiece." —Booklist
Also in This Series