Fairies and the quest for... »

Fairies and the quest for Never Land 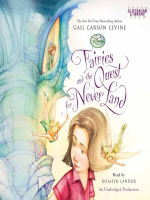 Description
Gwendolyn Carlisle loves fairies, perhaps too much. On her birthday, she receives the precious kiss necklace which has been passed down from mother to daughter ever since Peter Pan gave it to Wendy Darling. That night, Gwendolyn has the first of her visions-tantalizing, lifelike visions, almost as if she were actually in Fairy Haven. She sees animaltalent fairy Beck give a pie to wise Mother Dove and hears the voices of water-talent Rani and even Tinker Bell herself. More than anything, Gwendolyn wishes she could be there. When she is just about to lose hope, Peter Pan comes at last and blows fairy dust on her. The instant they reach Never Land, she sets out to find fairies. But the fairies are not eager to meet her. Then the evil Kyto, a dragon the fairies once helped to capture, escapes. He intends to destroy Never Land, starting with Fairy Haven. The fairies have but one choice: they must stop Kyto. As they set out on their desperate quest-a quest that could be their very last-the fairies must decide if Gwendolyn can help or hinder. . . . Infused with magic and feeling, and bursting with excitement, this thrilling tale is the third in the celebrated series of illustrated novels from Newbery Honor winning author Gail Carson Levine and renowned illustrator David Christiana.
Also in This Series