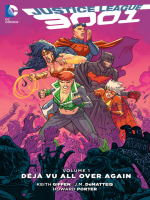 The Justice League's wildest year yet, from superstar creative team KEITH GIFFEN (LEGION OF SUPER-HEROES), J.M. DEMATTEIS (JUSTICE LEAGUE OF AMERICA) and HOWARD PORTER (JLA)! Thanks to Wonder Twins Terry and Teri Magnus, the original JL's DNA has been resurrected in 31st-century bodies. Their powers may be on the fritz and their memories may be patchy, but Superman, Batman, Wonder Woman, Flash and Green Lantern are, well, trying their best. Since they were brought together a year ago, the team has endured countless threats, endless in-house bickering, death, rebirth, death again, and various states in between. But now things are really getting serious: Starro, one of the original League's oldest enemies, has enslaved an entire planet's population-legally. Meanwhile, it's becoming obvious to everyone except the Justice League that their leader, Ariel Masters, is, in fact, trying to kill them, and old friends from the distant past are making their mysterious reappearances (and having some