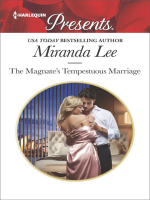 Description
Mining magnate Scott McAllister thinks that inexperienced, biddable Sarah is the perfect wife. Until he's led to believe she's committed the ultimate betrayal! When he confronts her, Sarah's defiant response astounds Scott, sparking a desire to uncover these unseen passionate depths . . .Sarah is furious Scott believed such lies, but even more furious that her body can't forget the seductive magic of his! The sheer power of their attraction and Scott's pull over her is overwhelming . . .In this fight to save their marriage, their bed is the ultimate battleground! Unless Scott can persuade Sarah that surrender is more fun with two winners . . .
Also in This Series