The Flight of the Silvers »

The Flight of the Silvers 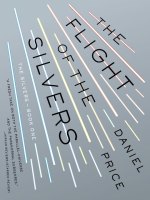 Description
For fans of Blake Crouch, the propulsive first book in the genre-bending Silvers trilogy, in which six ordinary people become extraordinary when they find themselves the sole survivors of an apocalypse that lands them on an Earth far different from our own—one on which they have X-Men-like powers to manipulate time.

Without warning, the world comes to an end. The sky looms frigid white. The electric grid falters. Airplanes everywhere crash to the ground, and finally, the sky comes down in a crushing sheet of light, taking out everything and everyone with it—except for Hannah and Amanda Given. Saved from destruction by three fearsome and powerful beings who adorn them each with an irremovable silver bracelet, the Given sisters suddenly find themselves on a strange new Earth where restaurants move through the air like flying saucers and the fabric of time itself is manipulated by common household appliances.

Upon arrival to this alternate America, Hannah and Amanda are taken to a science laboratory where they meet four other survivors from their world, all of whom wear matching silver bracelets—a mordant cartoonist, a shy teenage girl, a brilliant young Australian, and a troubled ex-prodigy. While being poked and prodded by scientists who may be friends or enemies, the group discovers that it’s not only their world that is different—they are different. Each has the power to manipulate time with their bare hands…a power they can’t always control. With no one but each other to trust, “the Silvers” must find out what exactly happened to their world and why it was that they were spared. But with unexpected new enemies emerging from around every corner, their quest for answers will quickly become a cross-country quest for survival.
Also in This Series