A Confederate General from... »

A Confederate General from Big Sur, Dreaming of Babylon, and the Hawkline Monster 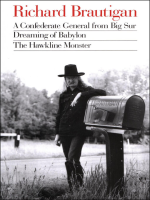 Description
This cult classic from the author of Trout Fishing in America " reads like a spaghetti Western crossed with Frankenstein, viewed through an opium haze" ( The Sunday Times ). The celebrated poet, novelist, and guru of the 1960s San Francisco literary scene, Richard Brautigan brings his highly original Gonzo style to this surreal parody Western. The time is 1902, the setting eastern Oregon. In the ice caves underneath Professor Hawkline's house, a deadly monster lurks. It's already turned the professor into an elephant foot umbrella stand, and now his two beautiful daughters have hired a pair of gunslingers to put a stop to the mayhem. But Hawkline Manor is full of curiosities and secrets, like the professor's underground laboratory where his work on The Chemicals remains unfinished. And as the gunslingers pursue their peculiar quarry, they encounter monstrous mischief, amorous advances, and evil that is all too human. "Bursting with colour, humour and imagery, Brautigan's virtuoso prose is rooted in his rural past." -- The Guardian
Also in This Series