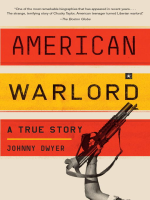 The incredible true story of Chucky Taylor, the only American ever convicted of torture. Chucky Taylor was an average American teenager, until he got a call from his father, a man who would become the infamous dictator of Liberia. Arriving in West Africa and reunited with his father, Chucky soon found himself leading a murderous militia group tasked with carrying out the president's vendettas. Young and drunk on power, and with no real training beyond watching action films, Chucky spiraled into a binge of drugs, violence, and women, committing crimes that stunned even his father. A work of astonishing journalism, American Warlord is the true story of those dark years in Liberia, cutting right to the bone of humanity's terrifying and unknowable capacity for cruelty to show just how easily a soul can be lost amid the chaos of war.