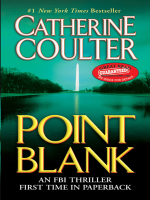 Description
FBI agents Lacey Sherlock and Dillon Savich face the most dangerous case of their careers in Catherine Coulter's explosive new thriller. Point Blank's propulsive story takes off when FBI agents Dillon Savich and Dane Carver are nearly killed while trying to rescue popular entertainer Pinky Womack from kidnappers. Lured to a motel in Pumis City, Virginia, by a known snitch, the only thing the agents discover is a glowing red timer. The place is demolished in a catastrophic explosion, but everyone survives. The same snitch leads them to Arlington National Cemetery, promising the agents Pinky's safe return. The search is interrupted when Savich takes a fateful call on his cell. The mysterious caller taunts Savich with other threats-against him, and against his wife, fellow agent Lacey Sherlock. Up against an untraceable foe-not even MAX can locate him-Savich and Sherlock find themselves fighting an unstable villain with a very long memory. At the same time, Agent Ruth Warnecki's passion for treasure hunting leads her to Winkel's Cave and a cave chamber that really shouldn't exist-as well as a dead student from Stanislaus Music School, left there for eternity. Some students have wandered quite far from the beaten path, with terrible consequences. An edge-of-your-seat thriller as exhilarating and frightening as anything she's ever written, Point Blankis Catherine Coulter's finest achievement.
Also in This Series