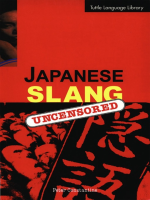 Much more than a Japanese phrasebook, this entertaining guide to Japanese slang is full of interesting and hilarious anecdotes and advice.Japanese Slang Uncensored reveals in vivid detail the richness of Japanese slang in all its amusing, bizarre, and shocking forms. The book dives unblushingly into Japan's fascinating secret languages, the ingo (hidden words) used by thieves, prostitutes, sushi chefs, pickpockets, Buddhist monks, and other colorful characters. Author Peter Constantine skillfully traces the origins of these expressions, in the process painting a revealing picture of Japan's subcultures and the people who move in their shadows.